Home » News » Collaborative efforts made impact on Journal of Morphology

We would like to share some exciting news on our collaboration with Dr. Raul Diaz & Dr. Julia Molnar. Journal of Morphology has notified us that published paper:

“Comparative musculoskeletal anatomy of chameleon limbs, with implications for the evolution of arboreal locomotion in lizards and for teratology” had huge contributions to the growing profile of Journal of Morphology.

For their research paper they have used our facility to perform staining of chameleon limbs and later performed microCT scans to visualize morphological structures. Full article can be found here:

Article in Journal of Morphology

Chameleon species have recently been adopte 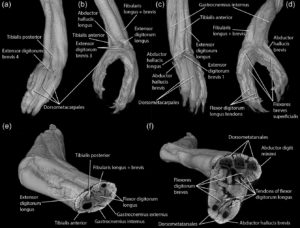 d as models for evo‐devo and macroevolutionary processes. However, most anatomical and developmental studies of chameleons focus on the skeleton, and information about their soft tissues is scarce. Here, we provide a detailed morphological description based on contrast enhanced micro‐CT scans and dissections of the adult phenotype of all the forelimb and hindlimb muscles of the Veiled Chameleon (Chamaeleo calyptratus) and compare these muscles with those of other chameleons and lizards. We found the appendicular muscle anatomy of chameleons to be surprisingly conservative considering the remarkable structural and functional modifications of the limb skeleton, particularly the distal limb regions. For instance, the zygodactyl autopodia of chameleons are unique among tetrapods, and the carpals and tarsals are highly modified in shape and number. However, most of the muscles usually present in the manus and pes of other lizards are present in the same configuration in chameleons. The most obvious muscular features related to the peculiar opposable autopodia of chameleons are: (1) presence of broad, V‐shaped plantar and palmar aponeuroses, and absence of intermetacarpales and intermetatarsales, between the digits separated by the cleft in each autopod; (2) oblique orientation of the superficial short flexors originating from these aponeuroses, which may allow these muscles to act as powerful adductors of the “super‐digits”; and (3) well‐developed abductor digiti minimi muscles and abductor pollicis/hallucis brevis muscles, which may act as powerful abductors of the “super‐digits.”